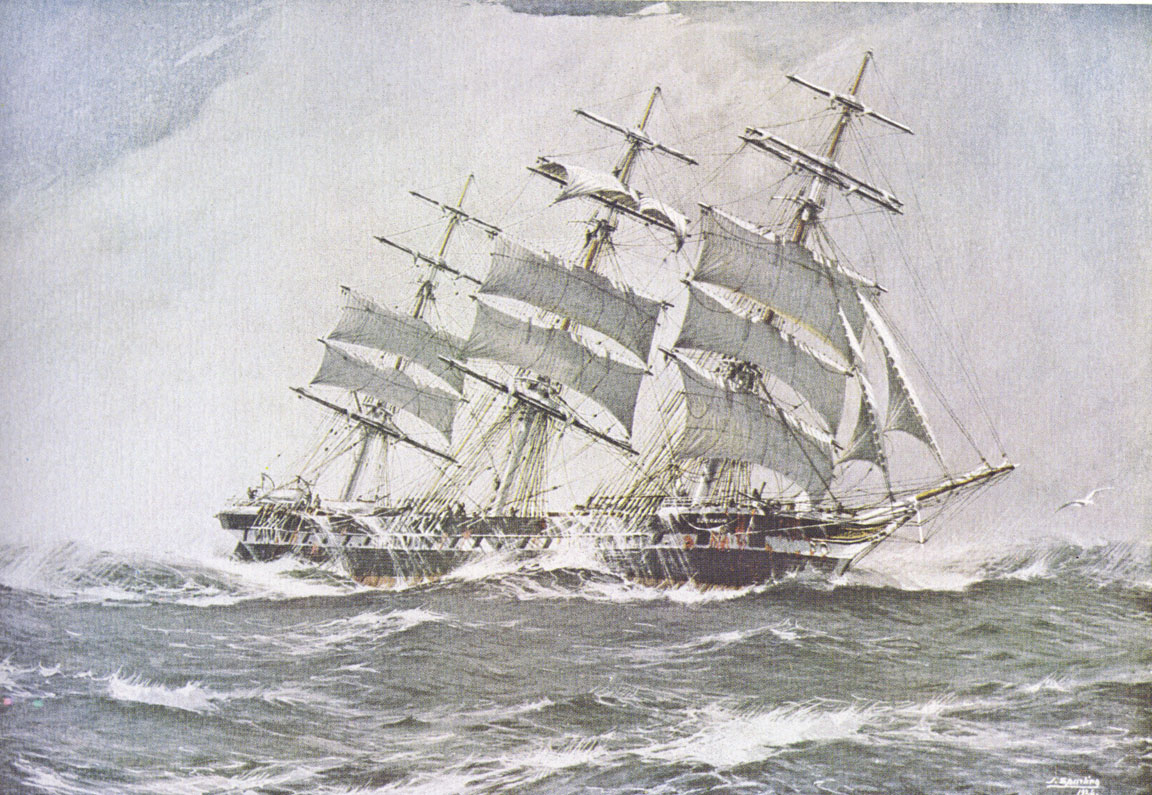 .
SOBRAON - From a painting by Jack Spurling illustrated in
"SAIL:The Romance of the Clipper Ships"

PASSENGER AND EMIGRANT
SHIPS
TO AUSTRALIA AND NEW ZEALAND

WHERE TO FIND PICTURES OF THEM 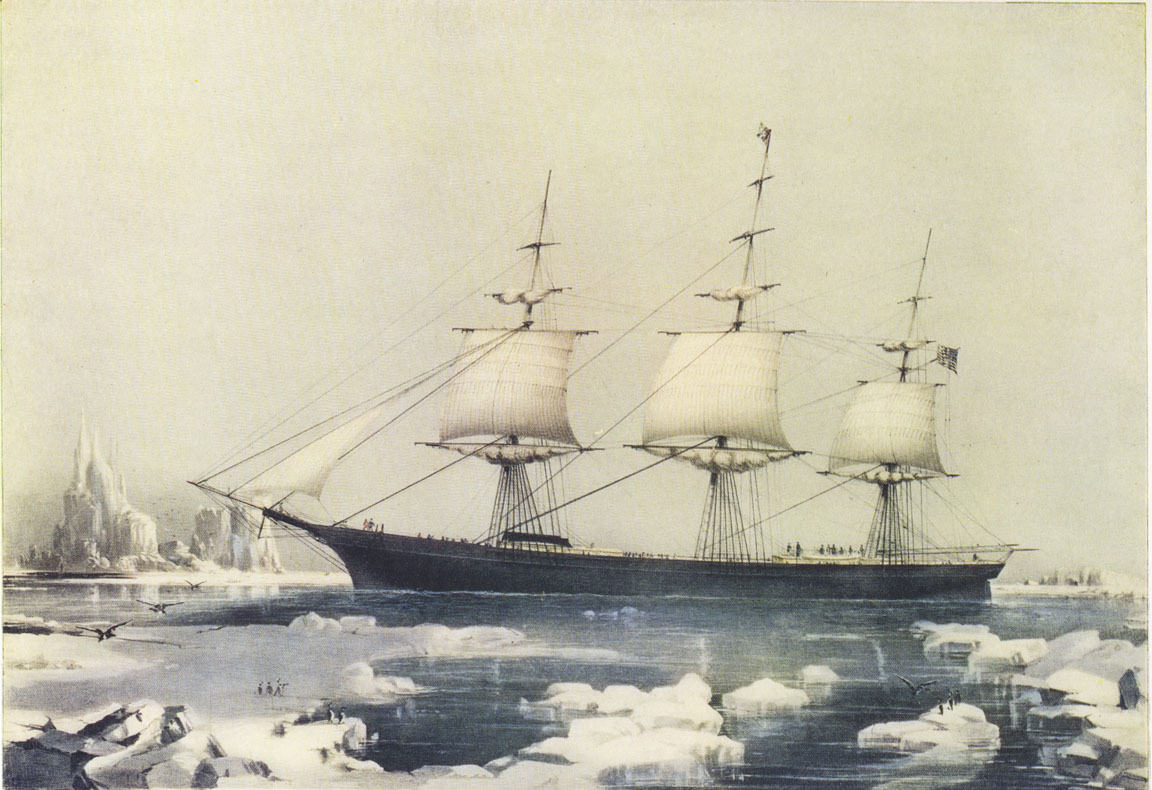 This site has been researched and put together by Roy Fernandez -
an ex-yachtee who knows what it is like to be out on blue water.
As he no longer sails, he likes to research and think about ships
and passages.  Any mistakes or obscurities are his, and for which
he apologizes and would be grateful for correction.  He regards
this website as an unfinished work which he hopes to expand.  He
would  like to add more German and other non-British sailing
vessels (with their picture references) which brought settlers to
Australia.  His own Fernandez ancestors arrived in Melbourne on
the White Star clipper 'Red Jacket' in 1855.  He can be contacted
by email below. 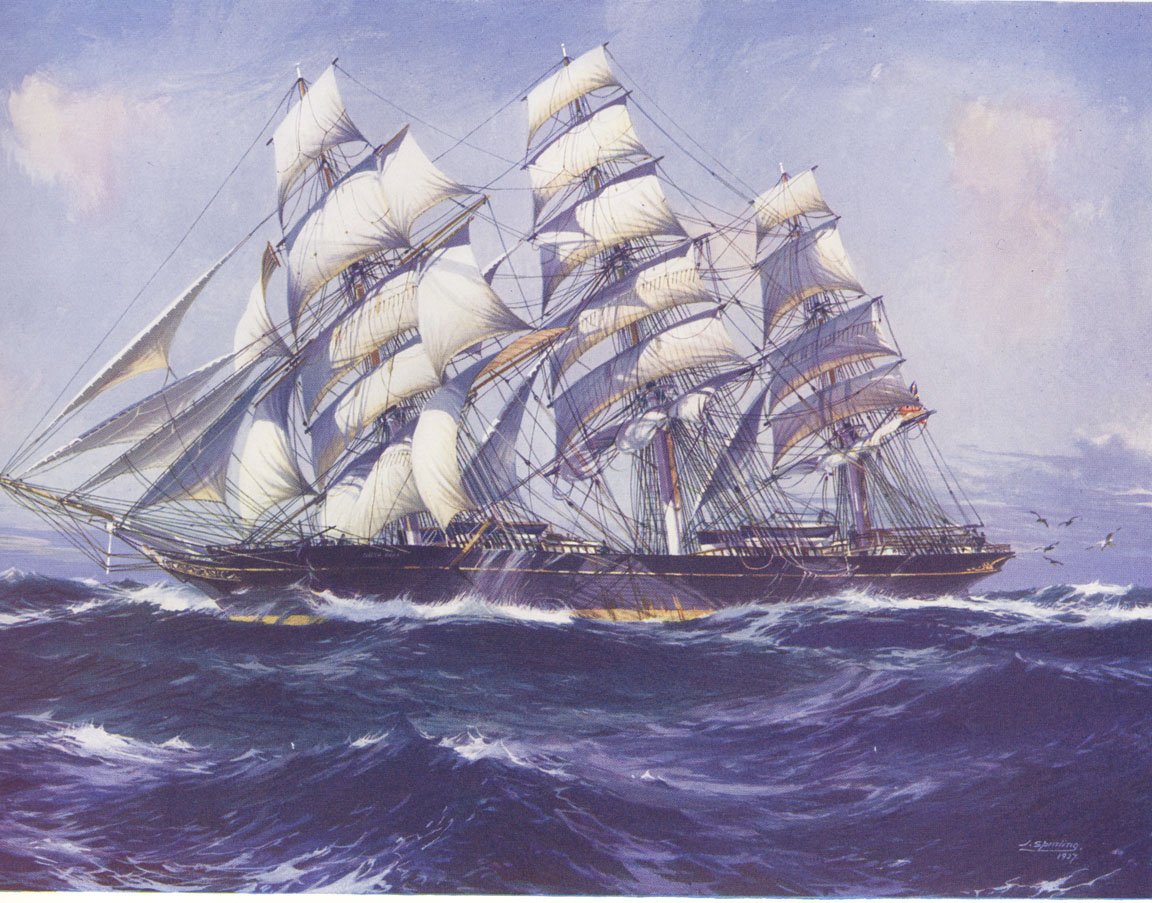 CUTTY SARK - From a painting by Jack Spurling illustrated in
"SAIL:The Romance of the Clipper Ships"

INDEX OF SHIPPING LINES (AND KEY)
FOR SHIP AND PICTURE SOURCES

OTHER LISTS FOR SHIP AND PICTURE DETAILS 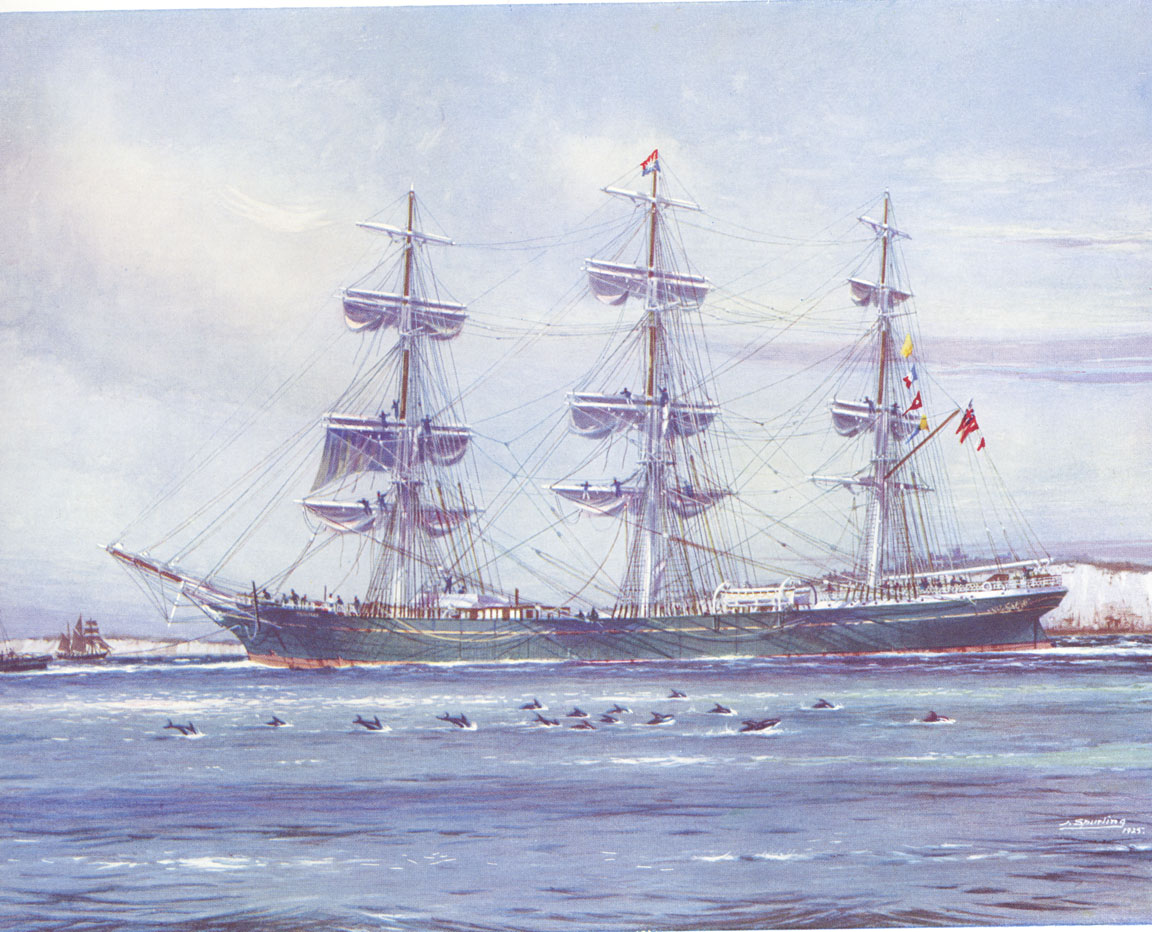 PERICLES - From a painting by Jack Spurling illustrated in
"SAIL:The Romance of  the Clipper Ships"

The details of each Sailng Vessel (where available) are set out
in the following order:

bk - Barque or Bark (in a 3 or more masted vessel, yards
with square rig on all but the last or mizzen mast)

bgn - Brigantine -   (2 masted vessel with square rig on
foremast only)

4. Tonnage: A volume measurement of the enclosed space on a vessel
- one ton  representing 100 cubic feet.  The method for calculating
tonnage has changed with time and the evolution of ship design.
The calculation before 1835 is described as 'old measurement'
(or o.m.) and after that date as 'new measurement' (or n.m.).
The method calculation was further refined in the 1850s with a
distinction between 'gross tons' (the total capacity) and 'net tons'
(after non-commercially usable space, e.g., machinery and crew
quarters' space is deducted).  The tonnages given in ship details

below are as far as possible gross tons. When figures in  'tons'(t)

with no qualification or 'registered tons' (rt) are provided, there
is an element of doubt and often reflects a different sytem of
measurement, e.g. with U.S.A. built ships.

5. & 6: Year and  Place of Construction (completion).  These details are
important for identifying  vessels with the same name.  Sometimes
date of 'launch' rather than 'completion'  is provided.  In most cases
it is in the same year but not always. This can lead to confusion
over the identification of a vessel. 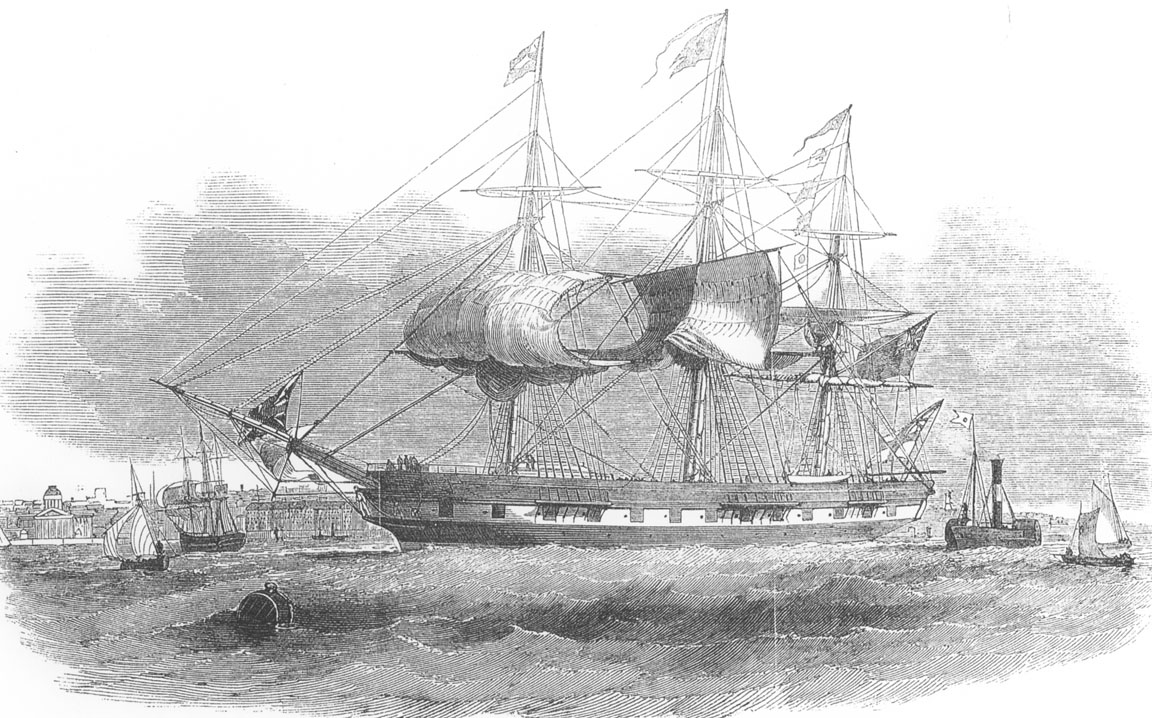 PICTURE AUSTRALIA  - provides access to the picture collections
of all  national and state libraries and museums, including,
the Australian War Memorial and National Archives of Australia.
http://www.pictureaustralia.org

B. BOOKS AND OTHER PUBLICATIONS

Vaughan Evans compiled indexes of illustrations (including ships)
of Australian and New Zealand interest.for each of these publications
These indexes are available on the website of the Australian
National Maritime Museum.. The index for the Illustrated London
News lists illustrations of over fifty sailing vessels from 1845 to 1881.

An oustanding book with colour plates of watercolours by Jack
Spurling of more than seventy well known sailing ships, including
many in the Australian and New Zealand trade, is "SAIL: The
Romance of the Clipper Ships".  The book is pictured by Jack
Spurling, storied by Basil Lubbock, and edited by F.A. Hook.
It was published in three volumes in the first instance by the Blue
Peter Publishing Company, London from 1927 to 1936.  In 1972,
Grossett & Dunlap, New York, published a facsimile reprint of
the three volumes.  A composite volume "The Best of Sail" which
includes thirty-six  colour plates of Spurling's paintings was also
published by Grossett & Dunlap in 1977.

Basil Lubbock's "The Colonial Clippers", "The Blackwall Frigates"
and "The Last of the Windjammers", Volumes I and II, published
respectively in 1921, 1924, 1927 and 1928, by Brown, Son &
Ferguson, Ltd., Glasgow,  and have been reprinted since, contain
photos as well as details of a large number of sailing vessels that
were well known in the Australia and New Zealand trade.  The
"Colonial Clippers" contains photos of more than eighty such
sailing ships.

Frank C. Bowen's "The Golden Age of Sail - Indiamen. Packets and
Clipper Ships with Illustrations from Contemporary Engravings and
Paintings in the MacPherson Collection" published in 1925 by Halton
& Truscott Smith Ltd., London  and Minton, Balch & Company, New
York, contains black & white and some colour reproductions of
lithographs by T.G. Dutton and J.R. Isaac as well as of paintings in
the MacPherson Collection held by the National Maritime Museum,
Greenwich, in the United Kingdom.

The American clipper ship prints published by Currier & Ives of
"Red Jacket", "Flying Cloud",  "Lightning", and "Sovereign of the Seas",
which carried people to Australia in the Gold Rush in the 1850s, needs
mention.  The compilation "Clipper Ships - Currier & Ives Prints No. 3 -
introduction by Felix Riesenberg" (published by The Studio Limited,
London and William Edward Rudge, New York , 1932) has colour
reproductions of  twenty one of  these prints.including of the four
clippers mentioned above.

David R. MacGregor's "Merchant Sailing Ships1815-1850", "Merchant
Sailing Ships 1850-1875", "Fast Sailing Ships - Their Design and
Construction 1775-1875", and "British and American Clippers. A
Comparison of their Design, Construction and Performance in the
1850s" (published by Conway Maritime Press Ltd., London) are also a
fruitful source of pictures and information.

The printed catalogues of the National Maritime Museum, Greenwich,
are a central resource in finding pictures of vessels of Australian and
New Zealand interest, in particular, the "Concise Catalogue of Paintings
in the National Maritime Museum", and the Museum's  "General
Catalogue of Historic Photographs, Volume II, Merchant Sailing Ships".
Online, the Museum's catalogues of 'Historic Photographs' and 'Prints
and Drawings' are important sources. The latter with its many thousands
of items is an outstanding collection of  lithographs, water colours,
etchings and drawings of vessels before they could be recorded by
photography.

The online catalogues of the Australian national and state libraries and
museums, in particular, the State Library of Victoria with its Malcolm
Brodie shipping collection and Allan C. Green collection of photographs
of sailing  vessels, is a great resource.  The Australian National
Maritime Museum, the National Libraries of Australia and of New
Zealand and the other State Libraries also hold important collections of
sailing ship paintings, etchings and photographs.  By searching the
name of a ship in Picture Australia, images of the ship where they exist
in the collections of all these institutions can be seen on one screen. 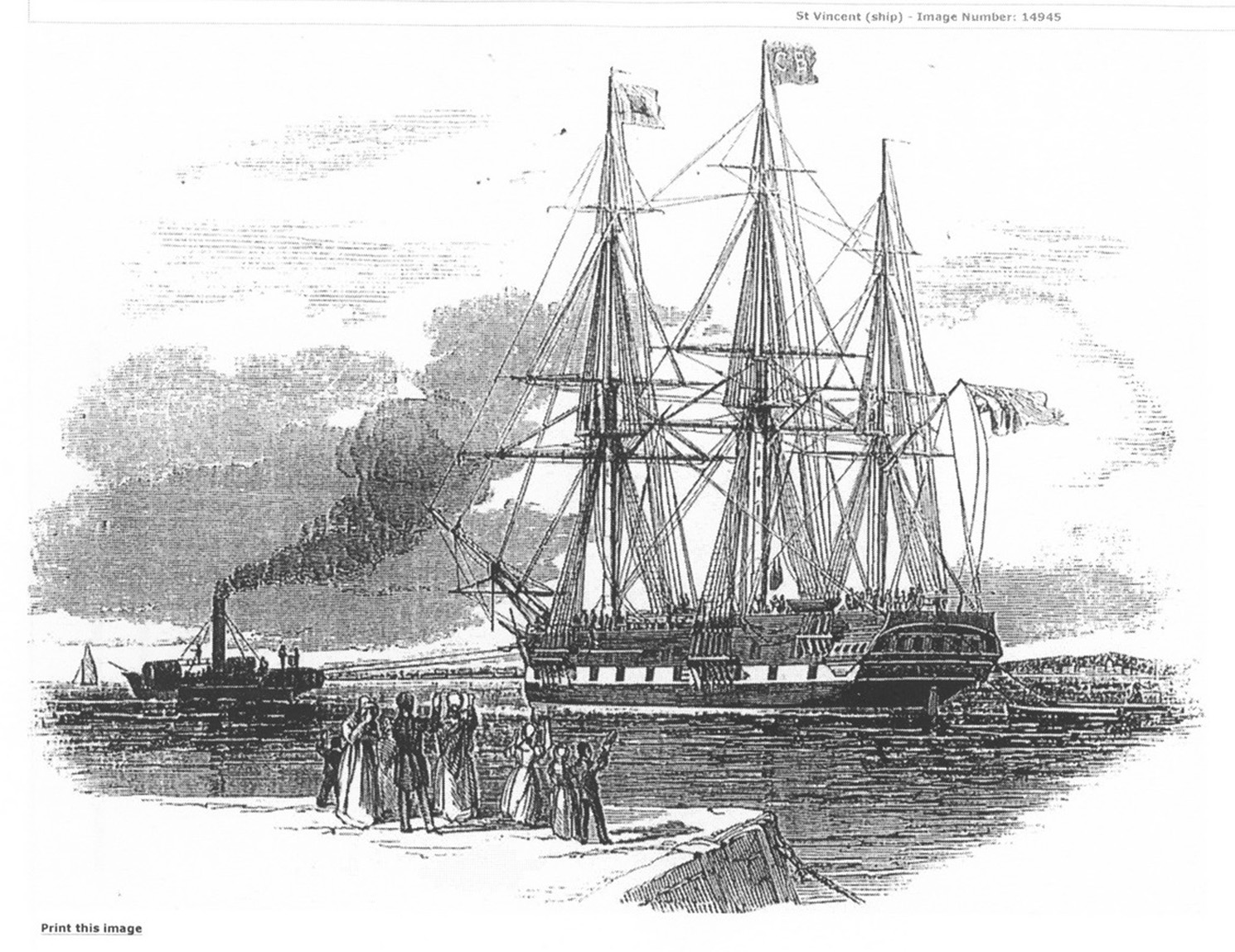